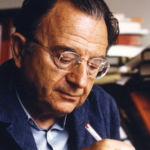 Why Is Erich Fromm Influential?

According to Wikipedia, Erich Seligmann Fromm was a German social psychologist, psychoanalyst, sociologist, humanistic philosopher, and democratic socialist. He was a German Jew who fled the Nazi regime and settled in the US. He was one of the founders of The William Alanson White Institute of Psychiatry, Psychoanalysis and Psychology in New York City and was associated with the Frankfurt School of critical theory.

Other Resources About Erich Fromm

What Schools Are Affiliated With Erich Fromm?

Erich Fromm is affiliated with the following schools:

What Are Erich Fromm's Academic Contributions?

Erich Fromm has made the following academic contributions: