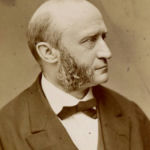 According to Wikipedia, Ernst Wilhelm Ritter von Brücke was a German physician and physiologist. He is credited with contributions made in many facets of physiology. Biography He was born Ernst Wilhelm Brücke in Berlin. He graduated in medicine at the University of Berlin in 1842, and during the following year, he became a research assistant to Johannes Peter Müller. In 1845 he founded the Physikalische Gesellschaft in Berlin, together with Emil Du Bois-Reymond, Hermann von Helmholtz and others, in the house of physicist Heinrich Gustav Magnus. Later on, this became known as the Deutsche Physikalische Gesellschaft . In 1846, Brücke was elected teacher of anatomy in the Akademie der Bildenden Künste, in Berlin. Following that, in 1848 he was appointed as professor of physiology at the University of Königsberg, replacing Karl Friedrich Burdach . In 1849 he acquired similar duties at the University of Vienna. In 1873, Emperor Franz Joseph I honored Brücke with a noble title—von Brücke—but he rarely used it.

What Schools Are Affiliated With Ernst Wilhelm von Brücke?

Ernst Wilhelm von Brücke is affiliated with the following schools: