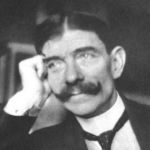 Why Is Frank Harris Influential?

According to Wikipedia, Frank Harris was an Irish-American editor, novelist, short story writer, journalist and publisher, who was friendly with many well-known figures of his day. Born in Ireland, he emigrated to the United States early in life, working in a variety of unskilled jobs before attending the University of Kansas to read law. After graduation, he quickly tired of his legal career and returned to Europe in 1882. He traveled in continental Europe before settling in London to pursue a career in journalism. In 1921, in his sixties, he became a US citizen. Though he attracted much attention during his life for his irascible, aggressive personality, editorship of famous periodicals, and friendship with the talented and famous, he is remembered mainly for his multiple-volume memoir My Life and Loves, which was banned in countries around the world for its sexual explicitness.

Other Resources About Frank Harris

What Schools Are Affiliated With Frank Harris?

Frank Harris is affiliated with the following schools:

What Are Frank Harris's Academic Contributions?

Frank Harris has made the following academic contributions: