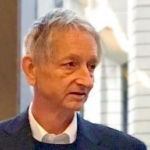 Why Is Geoffrey Hinton Influential?

Areas of Specialization: Artifical Intelligence, Deep Learning
Hinton has been called one of the “Godfathers of Artificial Intelligence” by media sources for his work on a neural network system known as “Deep Learning.” He divides his year between working for Google Brain, the influential AI group at Google, and as a professor of computer science at the University of Toronto in Canada.

Hinton, along with researchers David Rumelhart and Ronald Wilson, designed one of the key features in modern neural networks, a type of machine learning algorithm that learns from experience. In 1986, he published a description of using backpropagation to train neural networks on data, and this technique has become a lynchpin for all neural network successes to date. Hinton truly is one of the “godfathers” of AI, an honorific especially relevant today as major Web companies like Google, Facebook, Twitter and many others now use neural networks ubiquitously. At Google and the University of Toronto, Hinton focuses on Deep Learning systems, a type of neural networks that involves stacking multiple networks together to create powerful results, like learning to recognize faces and other objects in online photos. Self-driving cars also use Deep Learning systems for autonomous navigation.

Hinton was elected a Fellow of the Royal Society in 1998. With Yann LeCun and Yoshua Bengio, Hinton received the top prize in computer science, the Turing Award in 2018.

According to Wikipedia, Geoffrey Everest Hinton is a British-Canadian cognitive psychologist and computer scientist, most noted for his work on artificial neural networks. Since 2013, he has divided his time working for Google and the University of Toronto. In 2017, he co-founded and became the Chief Scientific Advisor of the Vector Institute in Toronto.

Other Resources About Geoffrey Hinton

What Schools Are Affiliated With Geoffrey Hinton?

Geoffrey Hinton is affiliated with the following schools: