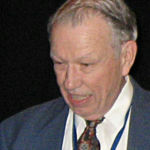 Why Is George Andrews Influential?

Andrews is widely published, with over 250 credits to his name. His work primarily focuses on number theory and combinatorics, particularly the study of partitions, on which he is a leading expert. Andrews is also credited with discovering Srinivasa Ramanujan’s “lost notebook” (a veritable mathematical treasure trove), and with Bruce C. Berndt has published four books on the subject, with proofs for some of Ramanujan’s formulas, including Integer Partitions and Ramanujan’s Lost Notebook: Part I.

According to Wikipedia, George Eyre Andrews is an American mathematician working in special functions, number theory, analysis and combinatorics.Education and career He is currently an Evan Pugh Professor of Mathematics at Pennsylvania State University. He did his undergraduate studies at Oregon State University and received his PhD in 1964 at the University of Pennsylvania where his advisor was Hans Rademacher.

Other Resources About George Andrews

What Schools Are Affiliated With George Andrews ?

George Andrews is affiliated with the following schools: