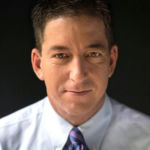 Why Is Glenn Greenwald Influential?

According to Wikipedia, Glenn Edward Greenwald is an American journalist, author, and lawyer. In 1996, he founded a law firm concentrating on First Amendment litigation. He began blogging on national security issues in October 2005, while he was becoming increasingly concerned with what he viewed to be attacks on civil liberties by the George W. Bush Administration in the aftermath of the September 11 attacks. He became a vocal critic of the Iraq War and has maintained a critical position of American foreign policy.

Other Resources About Glenn Greenwald

What Schools Are Affiliated With Glenn Greenwald?

Glenn Greenwald is affiliated with the following schools:

What Are Glenn Greenwald's Academic Contributions?

Glenn Greenwald has made the following academic contributions: