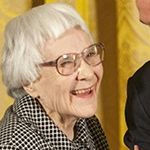 Why Is Harper Lee Influential?

According to Wikipedia, Nelle Harper Lee was an American novelist best known for her 1960 novel To Kill a Mockingbird. It won the 1961 Pulitzer Prize and has become a classic of modern American literature. Lee has received numerous accolades and honorary degrees, including the Presidential Medal of Freedom in 2007 which was awarded for her contribution to literature. She assisted her close friend Truman Capote in his research for the book In Cold Blood . Capote was the basis for the character Dill Harris in To Kill a Mockingbird.

Other Resources About Harper Lee

What Schools Are Affiliated With Harper Lee?

Harper Lee is affiliated with the following schools:

What Are Harper Lee's Academic Contributions?

Harper Lee has made the following academic contributions: