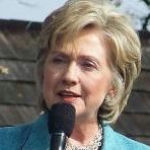 Why Is Hillary Clinton Influential?

According to Wikipedia, Hillary Diane Clinton is an American politician, diplomat, lawyer, writer, and public speaker who served as the 67th United States secretary of state from 2009 to 2013, as a United States senator from New York from 2001 to 2009, and as first lady of the United States from 1993 to 2001 as the wife of President Bill Clinton. A member of the Democratic Party, she was the party's nominee for president in the 2016 presidential election, becoming the first woman to win a presidential nomination by a major U.S. political party. Clinton won the popular vote in the election, making her the first woman to do so. However, she lost the Electoral College vote and thereby lost the presidential election.

Other Resources About Hillary Clinton

What Schools Are Affiliated With Hillary Clinton?

Hillary Clinton is affiliated with the following schools:

What Are Hillary Clinton's Academic Contributions?

Hillary Clinton has made the following academic contributions: