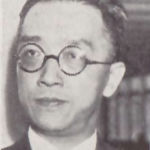 Why Is Hu Shih Influential?

According to Wikipedia, Hu Shih , also known as Hu Suh in early references, was a Chinese diplomat, essayist, literary scholar, philosopher, and politician. Hu is widely recognized today as a key contributor to Chinese liberalism and language reform in his advocacy for the use of written vernacular Chinese. He was influential in the May Fourth Movement, one of the leaders of China's New Culture Movement, was a president of Peking University, and in 1939 was nominated for a Nobel Prize in literature. He had a wide range of interests such as literature, philosophy, history, textual criticism, and pedagogy. He was also an influential redology scholar and held the famous Jiaxu manuscript for many years until his death.

Other Resources About Hu Shih

What Schools Are Affiliated With Hu Shih?

Hu Shih is affiliated with the following schools: