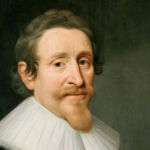 Why Is Hugo Grotius Influential?

According to Wikipedia, Hugo Grotius , also known as Huig de Groot and Hugo de Groot , was a Dutch humanist, diplomat, lawyer, theologian, jurist, poet and playwright. A teenage intellectual prodigy, he was born in Delft and studied at Leiden University. He was imprisoned in Loevestein Castle for his involvement in the intra-Calvinist disputes of the Dutch Republic, but escaped hidden in a chest of books that was transported to Gorinchem. Grotius wrote most of his major works in exile in France.

Other Resources About Hugo Grotius

What Schools Are Affiliated With Hugo Grotius?

Hugo Grotius is affiliated with the following schools:

What Are Hugo Grotius's Academic Contributions?

Hugo Grotius has made the following academic contributions: