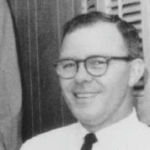 Why Is Jack Kilby Influential?

According to Wikipedia, Jack St. Clair Kilby was an American electrical engineer who took part in the realization of the first integrated circuit while working at Texas Instruments in 1958. He was awarded the Nobel Prize in Physics on December 10, 2000. Kilby was also the co-inventor of the handheld calculator and the thermal printer, for which he had the patents. He also had patents for seven other inventions.

Other Resources About Jack Kilby

What Schools Are Affiliated With Jack Kilby?

Jack Kilby is affiliated with the following schools: