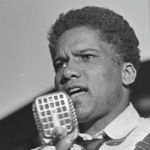 Why Is James Forman Influential?

According to Wikipedia, James Forman was a prominent African-American leader in the civil rights movement. He was active in the Student Nonviolent Coordinating Committee , the Black Panther Party, and the League of Revolutionary Black Workers. As the executive secretary of SNCC from 1961 to 1966, Forman played a significant role in the freedom rides, the Albany movement, the Birmingham campaign, and the Selma to Montgomery marches.

Other Resources About James Forman

What Schools Are Affiliated With James Forman?

James Forman is affiliated with the following schools: