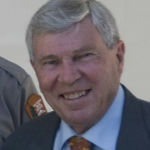 Why Is James M. McPherson Influential?

James McPherson was born in Valley City, North Dakota in 1936. He earned a B.A. from Gustavus Adolphus College and a PhD at Johns Hopkins University. Winner of the 1989 Pulitzer Prize for his book, Battle Cry of Freedom: The Civil War Era, he is an esteemed Civil War historian and scholar.

McPherson was honored as the Jefferson Lecturer by the National Endowment for the Humanities in 2000 for his exemplary work and scholarship in raising awareness of America’s history, most notably during the American Civil War. In 2007, he became the first ever recipient of the Pritzker Military Library Literature Award.

He has been a strong advocate for the preservation of Civil War monuments and battlegrounds and has served on numerous boards for the historical preservation of such sites. His fervent study of America’s Civil War history has given him a nuanced viewpoint on how America should commemorate this part of its past, leading him to ask then President Barack Obama to avoid laying a wreath at the Confederate Monument Memorial at Arlington National Cemetery, suggesting that to do so gives encouragement to the continued reverence of Confederate ideas.

Today, James McPherson is the George Henry Davis Professor Emeritus of United States History at Princeton University and a member of the board for Encyclopedia Britannica.

According to Wikipedia, James M. "Jim" McPherson is an American Civil War historian, and is the George Henry Davis '86 Professor Emeritus of United States History at Princeton University. He received the 1989 Pulitzer Prize for Battle Cry of Freedom: The Civil War Era. McPherson was the president of the American Historical Association in 2003.

Other Resources About James M. McPherson

What Schools Are Affiliated With James M. McPherson?

James M. McPherson is affiliated with the following schools:

James M. McPherson has made the following academic contributions: