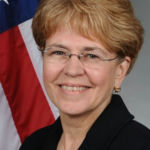 Why Is Jane Lubchenco Influential?

Areas of Specialization: Marine Ecology, Interactions Between the Environment and Human Well-Being
Jane Lubchenco is a professor at Oregon State University. She earned a B.A. in biology from Colorado College, and an M.S. in zoology and a Ph.D in marine ecology from Harvard University. Her research has included work on promoting sustainable practices to balance human/environmental impacts.

She has provided exemplary leadership in the sciences. She served as the President of the American Association for the Advancement of Science, and during her tenure, sought to promote a scientists’ “social contract”, which outlines the ethical and moral obligations of scientists, in their interactions with the public. She has also served as president of the International Council for Science and the Ecological Society of America. She served as the Under Secretary of Commerce for Oceans and Atmosphere, as well as the Administrator of the National Oceanic and Atmospheric Administration for a four-year term beginning in 2009. As the first woman to lead NOAA, she guided the efforts following the Deepwater Horizon oil spill and worked on legislation to prevent overfishing. She also worked to improve the processes and guidelines dictating the efforts of scientists under her purview, creating a Scientific Integrity Policy that allowed scientists to have a voice and be able to speak with the public.

According to Wikipedia, Jane Lubchenco is an American environmental scientist and marine ecologist who teaches and conducts research at Oregon State University. Her research interests include interactions between the environment and human well-being, biodiversity, climate change, and sustainable use of oceans and the planet. From 2009 to 2013, she served as Administrator of NOAA and Under Secretary of Commerce for Oceans and Atmosphere. In February 2021, she was appointed by President Joe Biden to serve as Deputy Director for Climate and Environment in the White House Office of Science and Technology Policy.

Other Resources About Jane Lubchenco

What Schools Are Affiliated With Jane Lubchenco?

Jane Lubchenco is affiliated with the following schools: