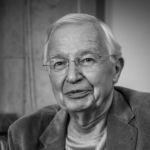 Why Is Jean-Marie Lehn Influential?

Lehn is Professor of Chemistry at the University of Strasbourg’s Institute of Advanced Study (USIAS), as well as Chair of Chemistry of Complex Systems. He is also a member of the Reliance Innovation Council of Reliance Industries Limited, India. Lehn studied philosophy and chemistry at the University of Strasbourg, receiving his undergraduate degree in chemistry, and later his Ph.D.

Lehn’s interests are primarily in organic chemistry, where he has explored supramolecular chemistry, or the study of how multiple molecules can lock or combine—in fact, the term “supramolecular” is due to Lehn. His early work focused on synthesizing vitamin B12, and his later investigations led to his discovery of “cryptands,” or cage-like molecules that have a cavity that can house another molecule. Lehn received the Nobel Prize for his groundbreaking work in chemistry in 1987.

Along with the Nobel Prize, Lehn has received a number of prestigious honors and awards during his exciting career. He became a Fellow of the Royal Society in 1993. In 1997, he received the Davy Award, named after 19th century chemist Humphry Davy, for his work in chemistry.

According to Wikipedia, Jean-Marie Lehn is a French chemist. He received the Nobel Prize in Chemistry together with Donald Cram and Charles Pedersen in 1987 for his synthesis of cryptands. Lehn was an early innovator in the field of supramolecular chemistry, i.e., the chemistry of host–guest molecular assemblies created by intermolecular interactions, and continues to innovate in this field. his group has published 790 peer-reviewed articles in chemistry literature.

Other Resources About Jean-Marie Lehn

What Schools Are Affiliated With Jean-Marie Lehn?

Jean-Marie Lehn is affiliated with the following schools: