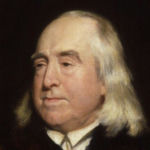 Why Is Jeremy Bentham Influential?

According to Wikipedia, Jeremy Bentham was an English philosopher, jurist, and social reformer regarded as the founder of modern utilitarianism. Bentham defined as the "fundamental axiom" of his philosophy the principle that "it is the greatest happiness of the greatest number that is the measure of right and wrong." He became a leading theorist in Anglo-American philosophy of law, and a political radical whose ideas influenced the development of welfarism. He advocated individual and economic freedoms, the separation of church and state, freedom of expression, equal rights for women, the right to divorce, and the decriminalising of homosexual acts. He called for the abolition of slavery, capital punishment and physical punishment, including that of children. He has also become known as an early advocate of animal rights. Though strongly in favour of the extension of individual legal rights, he opposed the idea of natural law and natural rights , calling them "nonsense upon stilts." Bentham was also a sharp critic of legal fictions.

Other Resources About Jeremy Bentham

What Are Jeremy Bentham's Academic Contributions?

Jeremy Bentham has made the following academic contributions: