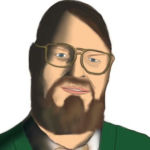 Why Is Jim Blinn Influential?

According to Wikipedia, James F. Blinn is an American computer scientist who first became widely known for his work as a computer graphics expert at NASA's Jet Propulsion Laboratory , particularly his work on the pre-encounter animations for the Voyager project, his work on the 1980 Carl Sagan documentary series Cosmos, and the research of the Blinn–Phong shading model.

Other Resources About Jim Blinn

What Schools Are Affiliated With Jim Blinn?

Jim Blinn is affiliated with the following schools: