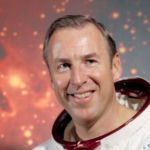 Why Is Jim Lovell Influential?

According to Wikipedia, James Arthur Lovell Jr. is an American retired astronaut, naval aviator, test pilot and mechanical engineer. In 1968, as command module pilot of Apollo 8, he became, with Frank Borman and William Anders, one of the first three astronauts to fly to and orbit the Moon. He then commanded the Apollo 13 lunar mission in 1970 which, after a critical failure en route, circled the Moon and returned safely to Earth.

Other Resources About Jim Lovell

What Schools Are Affiliated With Jim Lovell?

Jim Lovell is affiliated with the following schools: