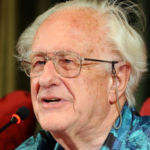 Why Is Johan Galtung Influential?

Johan Galtung is a principal founder of the Peace Research Institute Oslo, as well as a pioneering thought leader and scholar in the area of peace and conflict studies. He earned two Ph.Ds - a cand. real. in mathematics and a mag. art. in sociology - from the University of Oslo. Galtung is widely known for his scholarship in sociology, microhistory, anthropology, political science, economics, and history, and most notably, for his work in peace and conflict studies.

He has published more than 100 books and 1,000 articles – an astounding body of work. In 2004, he predicted that the United States, due to inconsistent application of professed values, hypocrisy, and self-righteousness, would fall from its position of global leadership by 2020. In 2009, he expanded on this theory with The Fall of the US Empire – and Then What? Successors, Regionalization or Globalization? US Fascism or US Blossoming?

His other published works include such themes as Globalizing God: Religion, Spirituality and Peace and Global Glasnost: Toward a New World Information and Communication Order? He is a member of the Norwegian Academy of Science and Letters and was the inaugural recipient of the Humanist Prize by the Norwegian Humanist Association.

According to Wikipedia, Johan Vincent Galtung is a Norwegian sociologist, and the principal founder of the discipline of peace and conflict studies. He was the main founder of the Peace Research Institute Oslo in 1959 and served as its first director until 1970. He also established the Journal of Peace Research in 1964. In 1969, he was appointed to the world's first chair in peace and conflict studies, at the University of Oslo. He resigned his Oslo professorship in 1977 and has since held professorships at several other universities; from 1993 to 2000 he taught as Distinguished Professor of Peace Studies at the University of Hawaii. He has been based in Kuala Lumpur, where he was the first Tun Mahathir Professor of Global Peace at the International Islamic University Malaysia until 2015.

Other Resources About Johan Galtung

What Schools Are Affiliated With Johan Galtung?

Johan Galtung is affiliated with the following schools: