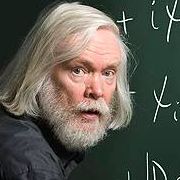 Why is this person notable and influential?
By AI Staff

John Ellis is a theoretical physicist who currently holds the title of Clerk Maxwell Professor of Theoretical Physics at King’s College London. He has also worked with the European Organization for Nuclear Research (CERN) since 1978, and held post doctoral positions at the SLAC National Accelerator Laboratory and California Institute of Technology in the early 1970s. Ellis earned his PhD in theoretical particle physics in 1971 from King’s College Cambridge.

Ellis’ work has mostly focused on the phenomena of particle physics, with experiments and studies including using the Large Hadron Collider at CERN to test theories. He is considered a pioneer in the area of particle astrophysics. Much of his work has focused on understanding and finding Higgs boson particles. In addition to his research, Ellis is recognized as a major voice particle physics, participating in lectures around the world, and advocating for involving non-European nations in CERN scientific activities.

Ellis’ book, Quantum Reflections, introduces the basic philosophical and conceptual questions underlying the formulation of quantum mechanics and compiles a number of essays from leading thinkers in the field who are also inspired by the late John Bell.

For his work, John Ellis has received honors and awards including the Maxwell Medal and the Paul Dirac Prize from the Institute of Physics, fellowship with the Royal Society of London, honorary doctorates, and was named Commander of the Order of the British Empire in 2012.

Jonathan Richard Ellis is a British theoretical physicist who is currently Clerk Maxwell Professor of Theoretical Physics at King's College London.After completing his secondary education at Highgate School, he attended King's College, Cambridge, earning his PhD in theoretical particle physics in 1971. After brief post-doc positions in the SLAC Theory Group and Caltech, he went to CERN and has held an indefinite contract there since 1978. He was awarded the Maxwell Medal and the Paul Dirac Prize by the Institute of Physics in 1982 and 2005 respectively, and is an Elected Fellow of the Royal Society of London since 1985 and of the Institute of Physics since 1991. He was awarded an Honorary Doctorate from the University of Southampton, and twice won the First Award in the Gravity Research Foundation essay competition . He is also Honorary Doctor at Uppsala University.