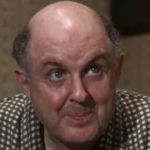 Why Is John McGiver Influential?

According to Wikipedia, John Irwin McGiver was an American character actor who made more than a hundred appearances in television and motion pictures over a two-decade span from 1955 to 1975. The owl-faced, portly character actor with his mid-Atlantic accent and precise diction, was often cast as pompous Englishmen and other stuffy, aristocratic and bureaucratic types. He was known for his performances in such films as Breakfast at Tiffany's ; The Manchurian Candidate , Who's Minding the Store? and Man's Favorite Sport? . He appeared on many television shows and commercials during the 1960s and early 1970s, including the first of a long running popular series of commercials for the American Express charge card .

Other Resources About John McGiver

What Schools Are Affiliated With John McGiver?

John McGiver is affiliated with the following schools: