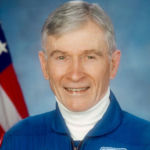 Why Is John Young Influential?

According to Wikipedia, John Watts Young was an American astronaut, naval officer and aviator, test pilot, and aeronautical engineer. He became the ninth person to walk on the Moon as commander of the Apollo 16 mission in 1972. He is the only astronaut to fly on four different classes of spacecraft: Gemini, the Apollo command and service module, the Apollo Lunar Module and the Space Shuttle.

Other Resources About John Young

What Schools Are Affiliated With John Young ?

John Young is affiliated with the following schools: