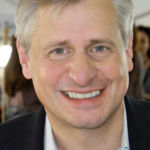 Why Is Jon Meacham Influential?

Jon Meacham is the Carolyn T. and Robert M. Rogers Endowed Chair in American Presidency at Vanderbilt University, an author, a contributing writer to The New York Times Book Review, and a contributing editor to Time magazine. He earned a bachelor’s degree from The University of the South.

Meacham has been deeply interested in politics since his youth and has written extensively about notable figures in American and world history. His presidential biographies include Thomas Jefferson: The Art of Power, Destiny and Power: The American Odyssey of George Herbert Walker Bush, and American Lion, Andrew Jackson in the White House, for which he won a Pulitzer Prize. Having been hired by the family of President Bush to write his biography, he became close to the family, eventually eulogizing both President Bush and his wife when they passed away.

He has published numerous other books, including American Gospel: God, the Founding Fathers, and the Making of a Nation, The Soul of America: The Battle for Our Better Angels and most recently, The Hope of Glory: Reflections on the Last Words of Jesus from the Cross.

Meacham is a frequent guest and commentator on shows such as Real Time with Bill Maher and MSNBC’s Morning Joe.

According to Wikipedia, Jon Ellis Meacham is an American writer, reviewer, historian and presidential biographer who is serving as the current Canon Historian of the Washington National Cathedral. A former executive editor and executive vice president at Random House, he is a contributing writer to The New York Times Book Review, a contributing editor to Time magazine, and a former editor-in-chief of Newsweek. He is the author of several books. He won the 2009 Pulitzer Prize for Biography or Autobiography for American Lion: Andrew Jackson in the White House. He holds the Carolyn T. and Robert M. Rogers Endowed Chair in American Presidency at Vanderbilt University.

Other Resources About Jon Meacham

What Schools Are Affiliated With Jon Meacham?

Jon Meacham is affiliated with the following schools:

What Are Jon Meacham's Academic Contributions?

Jon Meacham has made the following academic contributions: