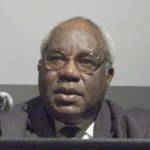 Why Is Julius L. Chambers Influential?

According to Wikipedia, Julius LeVonne Chambers was an American lawyer, civil rights leader and educator. Early life and education Chambers grew up during the Jim Crow era in rural Montgomery County, North Carolina. As a child, Chambers saw first hand the effects of discrimination when his father's auto repair business became a target of racial injustice in 1948. A white customer refused to pay his father and his father could not find a lawyer who was willing to file suit on behalf of a black man against a white man. Chambers has said that this experience made him resolved to pursue a career in law, in order to help end segregation and racial discrimination. After graduating from high school in 1954 , he enrolled at North Carolina Central University. He was the president of the student body at NCCU and graduated summa cum laude with an undergraduate degree in history in 1958. He earned a graduate degree in history from the University of Michigan. In 1959, Chambers entered law school at the University of North Carolina at Chapel Hill. He was the first African American editor-in-chief of the school's law review and graduated first in his class of 100 students in 1962. Chambers also became the first African American to gain membership in the Order of the Golden Fleece, the University's highest honorary society. In 1964, he earned his LL.M. from Columbia University Law School. During this period, from 1963–1964, Chambers also served as the first intern for the NAACP Legal Defense Fund in New York, having been selected by LDF's Director-Counsel Thurgood Marshall.

Other Resources About Julius L. Chambers

What Schools Are Affiliated With Julius L. Chambers?

Julius L. Chambers is affiliated with the following schools: