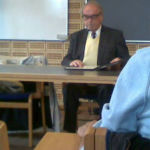 Why Is Jürgen Moltmann Influential?

Jürgen Moltmann was born in 1926 in Hamburg, Germany. In 1944, Moltmann was drafted into the German army to fight in World War II. He served for six months before surrendering to the British, after which he was confined to prisoner of war camps for three years in Belgium, England, and Scotland. After his release, he studied at the University of Gottïngen, earning a doctorate in 1952. Moltmann is emeritus professor of theology at Tübingen University, where he taught from 1967 to 1994.

Moltmann is best known for his theology of hope, a unique form of liberation theology centered on the idea that God suffers with humanity and the hope found in the resurrection of Christ. He has published dozens of books and articles on various topics, and he served as a mentor to Miroslav Volf. He coauthored several books with his wife, feminist theologian Dr. Elisabeth Moltmann-Wendel: Moltmann-Wendel: Humanity in God (1983), God–His and Hers (1991), and Passion for God: Theology in Two Voices (2003).

Moltmann was a longtime member of the Faith and Order Committee of the World Council of Churches. In 1984-1985, he delivered the prestigious Gifford Lectures at the University of Edinburgh, and in 2000, he won the Louisville Grawemeyer Award in Religion for his book The Coming of God: Christian Eschatology.

Other popular works from Moltmann include Theology of Hope: On the Ground and the Implications of a Christian Eschatology (1967) and The Crucified God: The Cross of Christ As the Foundation and Criticism of Christian Theology (1973).

According to Wikipedia, Jürgen Moltmann is a German Reformed theologian who is Professor Emeritus of Systematic Theology at the University of Tübingen and is known for his books such as the Theology of Hope, The Crucified God, God in Creation and other contributions to systematic theology. Jürgen Moltmann is the husband of Elisabeth Moltmann-Wendel, a notable feminist theologian. Jürgen Moltmann described his own theology as an extension of Karl Barth's theological works, especially the Church Dogmatics, and he has described his own work as Post-Barthian. He has received honorary doctorates from a number of institutions, such as Duke University , the University of Louvain in Belgium , the Alexandru Ioan Cuza University in Romania , the Chung Yuan Christian University in Taiwan , the Nicaraguan Evangelical University , and the University of Pretoria in South Africa . Moltmann was selected to deliver the prestigious Gifford Lectures in 1984–85, and was also the recipient of the 2000 University of Louisville and Louisville Presbyterian Theological Seminary Grawemeyer Award in Religion.

Other Resources About Jürgen Moltmann

What Schools Are Affiliated With Jürgen Moltmann?

Jürgen Moltmann is affiliated with the following schools: