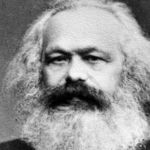 Why Is Karl Marx Influential?

According to Wikipedia, Karl Heinrich Marx was a German philosopher, critic of political economy, economist, historian, sociologist, political theorist, journalist and socialist revolutionary. His best-known titles are the 1848 pamphlet The Communist Manifesto and the three-volume Das Kapital . Marx's political and philosophical thought had enormous influence on subsequent intellectual, economic, and political history. His name has been used as an adjective, a noun, and a school of social theory.

Other Resources About Karl Marx

What Schools Are Affiliated With Karl Marx?

Karl Marx is affiliated with the following schools:

What Are Karl Marx's Academic Contributions?

Karl Marx has made the following academic contributions: