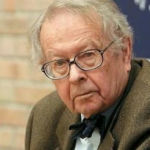 Why Is Kenneth Waltz Influential?

According to Wikipedia, Kenneth Neal Waltz was an American political scientist who was a member of the faculty at both the University of California, Berkeley and Columbia University and one of the most prominent scholars in the field of international relations. He was a veteran of both World War II and the Korean War.

Other Resources About Kenneth Waltz

What Schools Are Affiliated With Kenneth Waltz?

Kenneth Waltz is affiliated with the following schools:

What Are Kenneth Waltz's Academic Contributions?

Kenneth Waltz has made the following academic contributions: