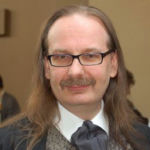 Why Is Kim Newman Influential?

According to Wikipedia, Kim James Newman is an English journalist, film critic and fiction writer. Recurring interests visible in his work include film history and horror fiction—both of which he attributes to seeing Tod Browning's Dracula at the age of eleven—and alternative fictional versions of history. He has won the Bram Stoker Award, the International Horror Guild Award, and the BSFA award.

Other Resources About Kim Newman

What Schools Are Affiliated With Kim Newman?

Kim Newman is affiliated with the following schools:

What Are Kim Newman's Academic Contributions?

Kim Newman has made the following academic contributions: