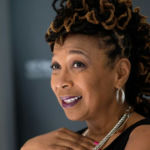 Why Is Kimberlé Crenshaw Influential?

Areas of Specialization: Intersectionality, Critical Race Theory, Feminism and Law, Civil Rights
Kimberlé Williams Crenshaw is a lawyer, scholar, philosopher, and major civil rights advocate. Currently she holds the position of professor at the UCLA School of Law, as well as at Columbia Law School. Crenshaw completed her undergraduate education at Cornell University before receiving her JD from Harvard law School in 1984, and later a master of laws from the University of Wisconsin–Madison.

Influential far beyond just the realm of law, Crenshaw is one of the founders of critical race theory and the concept of intersectionality. These are methods of analyzing issues in regards to the influence of race, as well as the intersection (hence the name) of various aspects of identity, such as economic status, education, and gender. Crenshaw notes, of course, that she put the name “intersectionality” on the concept, but it existed before in the work of people such as Angela J. Davis and Deborah King. These ideas are just as often applied in fields including literature and art, philosophy, sociology, and anthropology as they are in law and legal theory.

Crenshaw began her career as a law clerk under Judge Shirley Abrahamson of the Wisconsin Supreme Court. In 1986 she joined the UCLA Law school faculty, and in 1996 co-founded the African American Policy Forum. Notably, she assisted the Anita Hill legal team in 1991 in the Clarence Thomas confirmation hearings.

Kimberlé Crenshaw has received numerous awards and honors, including the Outstanding Scholar Award from the Fellows of the American Bar Association, an Alphonse Fletcher Fellowship, and a William H. Hastie Fellowship.

According to Wikipedia, Kimberlé Williams Crenshaw is an American civil rights advocate and a leading scholar of critical race theory. She is a professor at the UCLA School of Law and Columbia Law School, where she specializes in race and gender issues.

Other Resources About Kimberlé Crenshaw

What Schools Are Affiliated With Kimberlé Crenshaw?

Kimberlé Crenshaw is affiliated with the following schools: