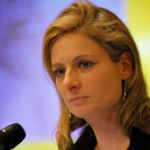 Why Is Lisa Randall Influential?

Lisa Randall is a theoretical physicist and currently the Frank B. Baird, Jr. Professor of Science on the physics faculty of Harvard University. Randall showed mathematical talent at an early age, winning first place in 1980 Westinghouse Science Talent Search at the age of 18. She received a BA degree in Physics and later a Ph.D. in theoretical particle physics from Harvard University in 1987.

Randall has made fundamental contributions to a number of areas of central importance in particle physics, including a contribution to the so-called Randall-Sundrum model, which seeks to explain the universe in terms of higher dimensional spaces. Randall also studies cosmology, with issues such as the nature of dark matter, cosmological inflation, and the cosmology of dimensions, all topics that contribute to our basic understanding of the physics of the universe. Professor Randall was the first tenured woman in the Princeton physics department, and similarly was the first female to receive tenure in Physics at Harvard University.

Randall has written popular accounts of physics, notably her 2005 Warped Passages: Unraveling the Mysteries of the Universe’s Hidden Dimensions and Knocking on Heaven’s Door: How Physics and Scientific Thinking Illuminate the Universe and the Modern World published in 2011. Importantly, she wrote an e-book explaining the discovery of the Higgs Boson, titled Higgs Discovery: The Power of Empty Space , and has helped the media and broader public understand the significance of the Higgs discovery as well as the Large Hadron Collider (LHC) used for experimental physics. She is a member of the American Academy of Arts and Sciences (2004), the National Academy of Sciences (2008), and is a fellow of the American Physical Society.

According to Wikipedia, Lisa Randall is an American theoretical physicist working in particle physics and cosmology. She is the Frank B. Baird, Jr. Professor of Science on the physics faculty of Harvard University. Her research includes elementary particles, fundamental forces and dimensions of space. She studies the Standard Model, supersymmetry, possible solutions to the hierarchy problem concerning the relative weakness of gravity, cosmology of dimensions, baryogenesis, cosmological inflation, and dark matter. She contributed to the Randall–Sundrum model, first published in 1999 with Raman Sundrum.

Other Resources About Lisa Randall

What Schools Are Affiliated With Lisa Randall?

Lisa Randall is affiliated with the following schools:

What Are Lisa Randall's Academic Contributions?

Lisa Randall has made the following academic contributions: