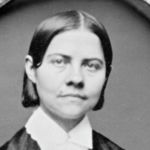 Why Is Lucy Stone Influential?

According to Wikipedia, Lucy Stone was a prominent U.S. orator, abolitionist, and suffragist, and a vocal advocate and organizer promoting rights for women. In 1847, Stone became the first woman from Massachusetts to earn a college degree. She spoke out for women's rights and against slavery. Stone was known for using her birth name after marriage, contrary to the custom of women taking their husband's surname.

Other Resources About Lucy Stone

What Schools Are Affiliated With Lucy Stone?

Lucy Stone is affiliated with the following schools: