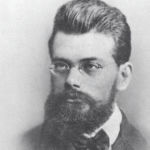 Why Is Ludwig Boltzmann Influential?

According to Wikipedia, Ludwig Eduard Boltzmann was an Austrian physicist and philosopher. His greatest achievements were the development of statistical mechanics, and the statistical explanation of the second law of thermodynamics. In 1877 he provided the current definition of entropy, where Ω is the number of microstates whose energy equals the system's energy, interpreted as a measure of statistical disorder of a system. Max Planck named the constant the Boltzmann constant.

Other Resources About Ludwig Boltzmann

What Schools Are Affiliated With Ludwig Boltzmann?

Ludwig Boltzmann is affiliated with the following schools: