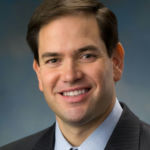 Why Is Marco Rubio Influential?

According to Wikipedia, Marco Antonio Rubio is an American politician and lawyer serving as the senior United States senator from Florida, a seat he has held since 2011. A member of the Republican Party, he served as Speaker of the Florida House of Representatives from 2006 to 2008. Rubio unsuccessfully sought the Republican nomination for President of the United States in 2016, winning presidential primaries in Minnesota, the District of Columbia, and Puerto Rico.

Other Resources About Marco Rubio

What Schools Are Affiliated With Marco Rubio?

Marco Rubio is affiliated with the following schools: