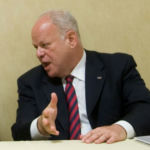 Why Is Martin Seligman Influential?

Both a prominent psychologist and a popular author of self-help books, Martin Seligman is best recognized for his activity in the field of positive psychology, and his corresponding theories of well-being. Among his work, Seligman is perhaps best known for initiating research in the concept of learned helplessness. Stemming from his interest in depression and the behavior of depressed people, Seligman developed a test using electroshock on canine subjects. In simplified terms, Seligman found that if a subject believes their situation to be truly helpless, they will do little to nothing to try and change it, and accept their fate. He identified this as a “learned” helplessness, which requires intervention to overcome.

Seligman is also recognized for his contributions to positive psychology, as discussed in his book with Christopher Peterson, Character Strengths and Virtues: A Handbook and Classification. In contrast to the Diagnostic and Statistical Manual of Mental Disorders (DSM) which focuses on disorder, Seligman argues that positive psychology focuses on positive characteristics, virtues, and what occurs in the absence of disorder. Other published works by Seligman include Helplessness: On Depression, Development, and Death and Learned Optimism: How to Change Your Mind and Your Life

Seligman boasts a long list of awards and honors to his name, including a Guggenheim fellowship, and a American Psychological Association Award for Lifetime Contributions to Psychology.

According to Wikipedia, Martin Elias Peter Seligman is an American psychologist, educator, and author of self-help books. Seligman is a strong promoter within the scientific community of his theories of positive psychology and of well-being. His theory of learned helplessness is popular among scientific and clinical psychologists. A Review of General Psychology survey, published in 2002, ranked Seligman as the 31st most cited psychologist of the 20th century.

Other Resources About Martin Seligman

What Schools Are Affiliated With Martin Seligman?

Martin Seligman is affiliated with the following schools: