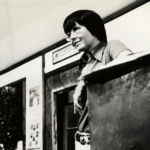 Why Is Mary Daly Influential?

According to Wikipedia, Mary Daly was an American radical feminist philosopher, academic, and theologian. Daly, who described herself as a "radical lesbian feminist", taught at the Jesuit-run Boston College for 33 years. Daly retired in 1999, after violating university policy by refusing to allow male students in her advanced women's studies classes. She allowed male students in her introductory class and privately tutored those who wanted to take advanced classes.

Other Resources About Mary Daly

What Schools Are Affiliated With Mary Daly?

Mary Daly is affiliated with the following schools: