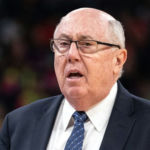 Why Is Mike Thibault Influential?

According to Wikipedia, Michael Francis Thibault is an American basketball head coach, formerly of the Connecticut Sun of the WNBA, and now of the Washington Mystics. In 2013, Thibault became the WNBA's all time most successful coach with 212 victories.

Other Resources About Mike Thibault

What Schools Are Affiliated With Mike Thibault?

Mike Thibault is affiliated with the following schools: