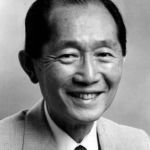 Why Is Minoru Yamasaki Influential?

According to Wikipedia, was an American architect, best known for designing the original World Trade Center in New York City and several other large-scale projects. Yamasaki was one of the most prominent architects of the 20th century. He and fellow architect Edward Durell Stone are generally considered to be the two master practitioners of "New Formalism".

Other Resources About Minoru Yamasaki

What Schools Are Affiliated With Minoru Yamasaki?

Minoru Yamasaki is affiliated with the following schools: