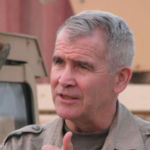 Why Is Oliver North Influential?

According to Wikipedia, Oliver Laurence North is an American political commentator, television host, military historian, author, and retired United States Marine Corps lieutenant colonel. A veteran of the Vietnam War, North was a National Security Council staff member during the Iran–Contra affair, a political scandal of the late 1980s. It involved the illegal sale of weapons to the Khomeini regime of the Islamic Republic of Iran to encourage the release of American hostages then held in Lebanon. North formulated the second part of the plan, which was to divert proceeds from the arms sales to support the Contra rebel groups in Nicaragua, sales which had been specifically prohibited under the Boland Amendment. North was granted limited immunity from prosecution in exchange for testifying before Congress about the scheme. He was initially convicted on three felony charges, but the convictions were vacated and reversed and all charges against him dismissed in 1991.

Other Resources About Oliver North

What Schools Are Affiliated With Oliver North?

Oliver North is affiliated with the following schools:

What Are Oliver North's Academic Contributions?

Oliver North has made the following academic contributions: