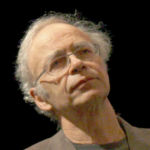 Why Is Peter Singer Influential?

Peter Singer first arrived on the scene of international prominence with the publication of Animal Liberation: The Definitive Classic of the Animal Movement in 1975. In this book, he makes a compelling case for eschewing the eating of animals for a life of veganism. His critical essay, “Famine, Affluence, and Morality” was also widely lauded for its advocacy for philanthropic efforts on behalf of the poor.

Among his other books are Democracy and Disobedience, How Are We to Live? Rethinking Life and Death, The President of Good & Evil: Questioning the Ethics of George W. Bush, The Life You Can Save, The Most Good You Can Do, and Ethics in the Real World. Singer holds his appointment at the Center jointly with his appointment as Laureate Professor at the University of Melbourne, attached to the School of Historical and Philosophical Studies. Singer was made a Companion of the Order of Australia (AC) in 2012.

He is founder and board chair of The Life You Can Save, which is a nonprofit dedicated to fighting poverty.

According to Wikipedia, Peter Albert David Singer is an Australian moral philosopher, currently the Ira W. DeCamp Professor of Bioethics at Princeton University. He specialises in applied ethics and approaches ethical issues from a secular, utilitarian perspective. He is known in particular for his book Animal Liberation , in which he argues in favour of veganism, and his essay "Famine, Affluence, and Morality", in which he argues in favour of donating to help the global poor. For most of his career, he was a preference utilitarian, but he stated in The Point of View of the Universe , coauthored with Katarzyna de Lazari-Radek, that he had become a hedonistic utilitarian.

Other Resources About Peter Singer

What Schools Are Affiliated With Peter Singer?

Peter Singer is affiliated with the following schools:

What Are Peter Singer's Academic Contributions?

Peter Singer has made the following academic contributions: