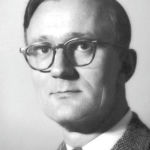 Why Is Polykarp Kusch Influential?

According to Wikipedia, Polykarp Kusch was a German-born American physicist. In 1955, the Nobel Committee gave a divided Nobel Prize for Physics, with one half going to Kusch for his accurate determination that the magnetic moment of the electron was greater than its theoretical value, thus leading to reconsideration of—and innovations in—quantum electrodynamics.

Other Resources About Polykarp Kusch

What Schools Are Affiliated With Polykarp Kusch?

Polykarp Kusch is affiliated with the following schools: