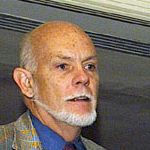 Why Is Richard Smalley Influential?

According to Wikipedia, Richard Errett Smalley was the Gene and Norman Hackerman Professor of Chemistry and a Professor of Physics and Astronomy at Rice University. In 1996, along with Robert Curl, also a professor of chemistry at Rice, and Harold Kroto, a professor at the University of Sussex, he was awarded the Nobel Prize in Chemistry for the discovery of a new form of carbon, buckminsterfullerene, also known as buckyballs. He was an advocate of nanotechnology and its applications.

Other Resources About Richard Smalley

What Schools Are Affiliated With Richard Smalley?

Richard Smalley is affiliated with the following schools: