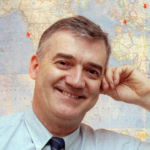 Why Is Robert Cailliau Influential?

According to Wikipedia, Robert Cailliau is a Belgian informatics engineer, computer scientist and author who proposed the first hypertext system for CERN in 1987 and collaborated with Tim Berners-Lee on the World Wide Web from before it got its name. He designed the historical logo of the WWW, organized the first International World Wide Web Conference at CERN in 1994 and helped transfer Web development from CERN to the global Web consortium in 1995. Together with Dr. James Gillies, Cailliau wrote How the Web Was Born, the first book-length account of the origins of the World Wide Web.

Other Resources About Robert Cailliau

What Schools Are Affiliated With Robert Cailliau?

Robert Cailliau is affiliated with the following schools: