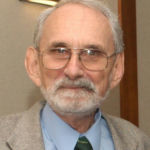 Why Is Robert Curl Influential?

Curl, who passed away July 3, 2022, was the Pitzer-Schlumberger Professor of Natural Sciences Emeritus, and Professor of Chemistry Emeritus at Rice University. Curl received his Bachelor of Science degree from Rice University (then the Rice Institute) in 1954. He got his Ph.D. in Chemistry from the University of California, Berkeley in 1957. Curl won the Nobel Prize in Chemistry in 1996 for his groundbreaking work on nanomaterials.

Curl’s research, especially his earlier work, focused on the use of microwave spectroscopy to analyze chemical compounds. This work led to his analysis of free radicals, an important area touching on many applications. Later, Curl analyzed large carbon chains occurring in red giant stars, work that led to his groundbreaking discovery of buckminsterfullerene, named after the structures created by architect Buckminster Fuller. His discovery has spurred interest in nanomaterials as well as molecular scale electronics. In later years Curl has worked on physical chemistry, including DNA sequencing, as well as exciting new technologies like quantum cascade lasers, semiconductor lasers that emit in the infrared part of the electromagnetic spectrum.

In addition to his Nobel Prize in Chemistry (which he shared with chemists Richard Smalley of Rice University and Harold Kroto of the University of Sussex), Curl was the recipient of many awards and distinctions for his outstanding work in Chemistry. He became Fellow of the National Academy of Sciences in 1997, and Fellow of the American Academy of Arts and Sciences in 1998. Curl won the International Prize for New Materials from the American Physical Society in 1992.

In 2001, he was elected an Honorary Fellow of the Royal Society of New Zealand. His work was recognized as National Historic Chemical Landmark of the American Chemical Society in 2010, an honor bestowed for research that represents a significant landmark in the field of Chemistry.

According to Wikipedia, Robert Floyd Curl Jr. is an American University Professor Emeritus, Pitzer–Schlumberger Professor of Natural Sciences Emeritus, and Professor of Chemistry Emeritus at Rice University. He was awarded the Nobel Prize in Chemistry in 1996 for the discovery of the nanomaterial buckminsterfullerene, along with Richard Smalley and Harold Kroto of the University of Sussex.

Other Resources About Robert Curl

What Schools Are Affiliated With Robert Curl?

Robert Curl is affiliated with the following schools: