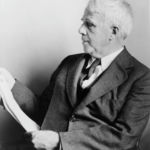 Why Is Robert Frost Influential?

According to Wikipedia, Robert Lee Frost was an American poet. His work was initially published in England before it was published in the United States. Known for his realistic depictions of rural life and his command of American colloquial speech, Frost frequently wrote about settings from rural life in New England in the early 20th century, using them to examine complex social and philosophical themes.

Other Resources About Robert Frost

What Schools Are Affiliated With Robert Frost?

Robert Frost is affiliated with the following schools:

What Are Robert Frost's Academic Contributions?

Robert Frost has made the following academic contributions: