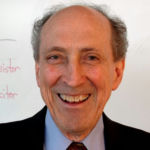 Why Is Robert H. Dennard Influential?

According to Wikipedia, Robert Dennard is an American electrical engineer and inventor. Dennard was born in Terrell, Texas, U.S. He received his B.S. and M.S. degrees in Electrical Engineering from Southern Methodist University, Dallas, in 1954 and 1956, respectively. He earned a Ph.D. from Carnegie Institute of Technology in Pittsburgh, Pennsylvania, in 1958. His professional career was spent as a researcher for International Business Machines.

Other Resources About Robert H. Dennard

What Schools Are Affiliated With Robert H. Dennard?

Robert H. Dennard is affiliated with the following schools: