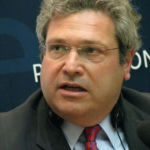 Why Is Robert Kagan Influential?

According to Wikipedia, Robert Kagan is an American neoconservative scholar, and critic of U.S. foreign policy and a leading advocate of liberal interventionism. A co-founder of the neoconservative Project for the New American Century, he is a senior fellow at the Brookings Institution and a member of the Council on Foreign Relations. Kagan has been a foreign policy adviser to U.S. Republican presidential candidates as well as Democratic administrations via the Foreign Affairs Policy Board. He writes a monthly column on world affairs for The Washington Post. During the 2016 U.S. presidential election campaign, Kagan left the Republican Party due to the party's nomination of Donald Trump and endorsed the Democratic candidate, Hillary Clinton, for president.

Other Resources About Robert Kagan

What Schools Are Affiliated With Robert Kagan?

Robert Kagan is affiliated with the following schools:

What Are Robert Kagan's Academic Contributions?

Robert Kagan has made the following academic contributions: