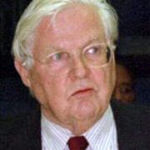 Why Is Robert Mundell Influential?

According to Wikipedia, Robert Alexander Mundell was a Canadian economist. He was a professor of economics at Columbia University and the Chinese University of Hong Kong. He received the Nobel Memorial Prize in Economic Sciences in 1999 for his pioneering work in monetary dynamics and optimum currency areas. Mundell is known as the "father" of the euro, as he laid the groundwork for its introduction through this work and helped to start the movement known as supply-side economics. Mundell was also known for the Mundell–Fleming model and Mundell–Tobin effect.

Other Resources About Robert Mundell

What Schools Are Affiliated With Robert Mundell?

Robert Mundell is affiliated with the following schools: