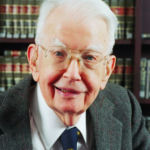 Why Is Ronald Coase Influential?

According to Wikipedia, Ronald Harry Coase was a British economist and author. He was the Clifton R. Musser Professor of Economics at the University of Chicago Law School, where he arrived in 1964 and remained for the rest of his life. He received the Nobel Memorial Prize in Economic Sciences in 1991. Coase believed economists should study real-world wealth creation, in the manner of Adam Smith, stating, "It is suicidal for the field to slide into a hard science of choice, ignoring the influences of society, history, culture, and politics on the working of the economy." He believed economic study should reduce emphasis on price theory or theoretical markets and instead focus on real markets. He established the case for the corporation as a means to pay the costs of operating a marketplace. Coase is best known for two articles: "The Nature of the Firm" , which introduces the concept of transaction costs to explain the nature and limits of firms; and "The Problem of Social Cost" , which suggests that well-defined property rights could overcome the problems of externalities if it were not for transaction costs . Additionally, Coase's transaction costs approach is currently influential in modern organizational economics, where it was reintroduced by Oliver E. Williamson.

Other Resources About Ronald Coase

What Schools Are Affiliated With Ronald Coase?

Ronald Coase is affiliated with the following schools: