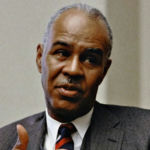 Why Is Roy Wilkins Influential?

According to Wikipedia, Roy Ottoway Wilkins was a prominent activist in the Civil Rights Movement in the United States from the 1930s to the 1970s. Wilkins' most notable role was his leadership of the National Association for the Advancement of Colored People , in which he held the title of Executive Secretary from 1955 to 1963 and Executive Director from 1964 to 1977. Wilkins was a central figure in many notable marches of the civil rights movement. He made valuable contributions in the world of African-American literature, and his voice was used to further the efforts in the fight for equality. Wilkins' pursuit of social justice also touched the lives of veterans and active service members, through his awards and recognition of exemplary military personnel.

Other Resources About Roy Wilkins

What Schools Are Affiliated With Roy Wilkins?

Roy Wilkins is affiliated with the following schools: