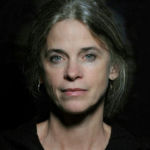 Why Is Sally Mann Influential?

According to Wikipedia, Sally Mann HonFRPS is an American photographer who has made large format black and white photographs—at first of her young children, then later of landscapes suggesting decay and death. Early life and education Born in Lexington, Virginia, Mann was the third of three children. Her father, Robert S. Munger, was a general practitioner, and her mother, Elizabeth Evans Munger, ran the bookstore at Washington and Lee University in Lexington. Mann was raised by an atheist and compassionate father who allowed Mann to be "benignly neglected". Mann was introduced to photography by her father, who encouraged her interest in photography; his 5x7 camera became the basis of her use of large format cameras today. Mann began to photograph when she was sixteen. Most of her photographs and writings are tied to Lexington, Virginia. Mann graduated from The Putney School in 1969, and attended Bennington College and Friends World College. She earned a BA, summa cum laude, from Hollins College in 1974 and a MA in creative writing in 1975. She took up photography at Putney where, she claims, her motive was to be alone in the darkroom with her boyfriend. She made her photographic debut at Putney with an image of a nude classmate. Mann has never had any formal training in photography and she "never read[s] about photography".

Other Resources About Sally Mann

What Schools Are Affiliated With Sally Mann?

Sally Mann is affiliated with the following schools:

What Are Sally Mann's Academic Contributions?

Sally Mann has made the following academic contributions: